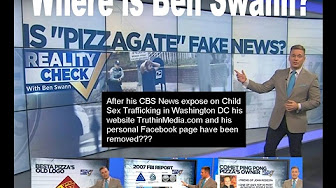 Investigative journalist Ben Swann of CBS Reality Check picked up on the PizzaGate story being covered by social media, and this website, in January and I was encouraged to see that Swann was covering the story.

Swann has obviously been censored – big time. Let’s pray for his safety.

In the meantime, GQ reported that James Alefontis, a DC pizza shop owner, was one of the top 50 most influential people in Washington. You might also remember that this same James Alefontis threatened a You Tuber, after being implicated as a dangerous pedophile during the You Tuber’s examination of Alefontis’s building permit, bizarre photos on his Instagram account, and the underground tunnels under his pizza establishment, Comet Ping Pong pizza, while situated close to a nearby children’s playground (please see PizzaGate and PizzaGate Updates under the ABOMINATIONS category of this site for more information).

In the meantime, the Los Angeles County Sheriff’s Department held a press conference announcing they have arrested hundreds of people charged with human trafficking. That video on You Tube was mixed right in with the latest coverage on PizzaGate, but why the big news conference all of a sudden about Los Angeles, and why did it show up among the PizzaGate coverage? PizzaGate is largely about the Washington, DC, pedophiles. In fact, You Tubers have been distracted by the LA County Sheriff’s announcement. The Sheriff said that human trafficking will not be tolerated in LA. That’s wonderful, but without some arrests in DC, that news is an invitation for traffickers to set up shop in DC!

The LA Sheriff’s are doing their job, so why do you suppose they don’t just keep doing their job and allow the rest of the world to keep focused on the DC PEDOPHILES THAT NO ONE SEEMS TO BE DOING ANYTHING ABOUT!

There is talk of an FBI leak that the pedophiles are going down in Washington. We have been hearing that for weeks, but no one has been arrested. We haven’t even heard of an interrogation.

If anyone believes that the LA arrests are going to distract those of us covering the DC pedo-Luciferians, they are going to be very disappointed.

I will be impressed with an “update on PizzaGate” when I see James Alefontis, the Podesta brothers, the Clintons, Marina Abramovic, Joe Biden and Barack Hussein Obama interrogated and at least some of them in cuffs! (For more information, please see articles under the ABOMINATIONS category.)

The pedo-Luciferians are working real hard to threaten some of us, freeze our Pay Pal accounts, shut down our websites, You Tube accounts, block our social media accounts, shoot RFID chips into our backs, etc; but this only proves how high up in government, even inside the FBI, these PIECES OF DUNG are positioned.

Albeit, if everyone joins in spreading this TRUE NEWS, they can’t take us all out, folks, so we need to keep spreading the word, LOUD AND CLEAR! Lets be wise and NOT BE DISTRACTED UNTIL SOMETHING IS DONE!

We need to keep praying for the missing children and that someone with some BACKBONE in law enforcement will converge upon the tunnels in Washington and the homes and establishments of these creepy walking demons from the pits of hell!

The ancient writings in Sefer haYashar, known as the Book of Jasher in English, state the following about the cities of Sodom, of which there were four:

“And the cities of Sodom had four judges to four cities and these were there names, Serak in the city of Sodom, Sharkad in Gomorrah, Zabnac in Admah and Menon in Zeboyim…And by desire of their four judges, the people of Sodom and Gomorrah had beds erected in the streets of the cities, and if a man came to these places, they (the Sodomites – so named for their prominent sin) laid hold of him and brought him to one of their beds and, by force, made him to lie in them” Jasher 19:1,3.

The inhabitants of Sodom abused strangers passing through their cities in those beds, until they died, according to the rest of the account.

God heard the cries of the people being tortured and killed by Sodomites (homosexuals), so He sent two angels to bring out one righteous man by the name of Lot, and his family, after which He destroyed Sodom with fire and brimstone.

As elite pedophiles abuse and likely kill young children, according to photos and the code language used throughout the (Wikileaks) emails and Instagram accounts of those in the highest echelons of government, nothing has been done to find the children, or rescue them!

Is our nation, and other nations that harbor these devils, such as the United Kingdom, not worse than Sodom and Gomorrah?

Feigned empathy on that face, but decrepitly wicked inside!

British Labor Party Member and former Secretary of State for Health Patricia Hewitt – pedophile, or okay with pedophiles. Either way, satanically influenced, yet still an esteemed former politician in Britain! What does that tell us about Britain?!

Witchy eyes and a witchy mouth. I say it’s a witch!

These people have lying spirits (1 Kings 22:22) in them. The Word of God says that the marriage bed is undefiled (Hebrews 13:4); everything else is fornication and CHILD ABUSE! Since the dimwits named above don’t know the difference, or that the bodies of little children shouldn’t be subjected to the sexual abuse of adults, someone needs to kick their hind ends out government offices in Britain! That would be a great thing, if the entire oligarchy weren’t fiendishly wicked and rife with pedophilia!

In Lot’s day, the cities of Sodom were abusing men sexually in the streets. All of the circumstantial evidence points to the fact that children are being sexually abused, and likely even killed, under the streets!

Our generation is much worse than Sodom and this emphatically demonstrates that the Lord’s return is near, even at the door (Matthew 24:33)!