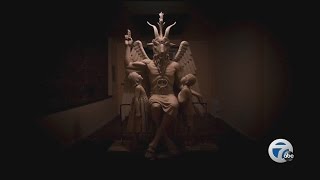 Just before midnight on Saturday, the Satanic Temple of Detroit unveiled a nine foot tall monument to honor satan. The bronze statue, weighing one ton, was erected near an industrial building close to the Detroit River, as worshipers cheered, “Hail satan!”

The fact that this statue was erected on Tish’a B’av (9th of Av), a day of fasting for Jews and remembrance of significant disasters befalling the Jewish people, God’s elect, is obviously no coincidence. Satan hates God’s people and will work to destroy them through his agents, until the Lord returns to defend His people, Israel!

The statue illustrates a goat’s head, human body, wings and cloven hooves, with a boy and girl standing on each side of the devil, looking up at him.

The children included in the design of this image are very significant. There has been such an outrageous spiritual attack on children in America that it staggers the imagination.

In recent years, public schools have installed gay, lesbian, bisexual and transgender clinics (GLSEN) throughout the nation under the guise of “tolerance” and “antibullying.”

Planned Parenthood’s “sex education” in public schools include such an X-rated display of pornography that the New York Times and Washington Post refused to print a protest about the intolerant content (which included the curriculum), stating it was “too graphic” and “too shocking” for their adult readers!

Unwed teen pregnancies and abortions were scarce in the 1960s, but they have skyrocketed today. Why do you suppose that is? Public schools began defiling the minds of children with their perversion of “sex education.”

Children used to honor their parents in the 1960s and they were generally very polite. Today, many children are incorrigible, incontinent and some even display criminal behaviors. Why do you suppose that is a major problem today? Public schools teach secularism and Socialism, which is antichrist, antifamily and leads to such behaviors.

While parents dozed off spiritually, or slipped into spiritual comas altogether, neglecting prayer, church attendance and the study of God’s Word, not only for themselves, but also for their children; public schools kicked God and prayer out, bringing in evolutionary monkey charts (which is a mathematical impossibility), Socialist antichrist curriculum and X-rated “sex education,” more recently demonstrating to children AS YOUNG AS 10 how to – step by step – commit sodomy in their “sex education” classes!

The Word of God tells us this is an abomination (Leviticus 18:22) and leads to a reprobate mind (Romans 1).

*If you have children, please visit the Home Education page.

“Because iniquity shall abound (in the last days), the love of many shall wax cold” Matthew 24:12.

“This know also that in the last days perilous times shall come, for men will be lovers of their own selves, covetous, boasters, proud, blasphemers, disobedient to parents, unthankful, unholy, without natural affection, trucebreakers, false accusers, incontinent, fierce, despisers of those that are good, traitors, heady, highminded, lovers of pleasures more than lovers of God” 2 Timothy 3:1-4.

The wrath of God will be poured out upon those who worship devils during the great tribulation that is soon coming, according to the prophecies of John the Revelator:

“And the rest of the men which were not killed by these plagues yet repented not of the works of their hands, that they should not worship devils, idols of gold, silver, brass, stone and of wood, which neither can see, nor hear, nor walk” Revelation 9:20.

When people stoop so far into sin and refuse to repent, there comes a day when they will not be able to repent, even when the wrath of God is poured out; they become reprobate.

“Now the Spirit speaks expressly, that in the latter times some shall depart from the faith, giving heed to seducing spirits and doctrines of devils, speaking lies in hypocrisy, having their conscience seared with a hot iron” 1 Timothy 4:1-2. 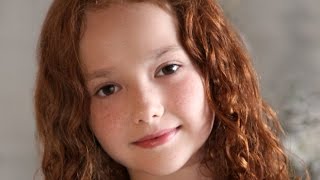 In at least 13 Seattle schools, girls as young as 11 years old are being offered long-acting reversible contraceptives (LARCs), including IUDs and hormonal implants. How do you like that, parents?

You might be okay with that? Well, how about the fact that LARCs are associated with serious side effects, such as uterine perforation and infection?

Why do you suppose schools are advancing further and further into offering free LARCs and abortions, even to little girls in elementary schools? When I was 11, during the 60s, I was out playing games with the neighborhood kids and sexual interludes were the farthest thing from my mind!

This is the progression (by the Socialist-Progressives) in a nutshell:

There you have it. Just as ancient Israel was punished sorely by God for “passing their children through the fire” of the idol Molech (literally laying their children on the scorching hot arms of their idol and false god, Molech, as a blazing fire underneath incinerated their children alive!), abominable America will not get away with defiling the minds of their young children, nor will they get away with chopping up and burning unborn babies out of their mother’s wombs at the rate of 120 PER HOUR, 2 EVERY MINUTE!

Aren’t those statistics horrific, especially considering the fact that before the wicked kicked God and prayer out of public schools, unwed teen pregnancies were rare!

If “Christians” had all stood against the spiritual attack on America’s children, at least their own children, and had extracted their children from the public school system in the 60s, the wicked would have had to back up, or have just a few children in their hands to corrupt. Christians did little to nothing; and unless God’s people pull together now and get their children out of the hands of the wicked, their children might not make heaven because of the filth and corruption they are being exposed to in their schools.

God instructed parents to teach their children in the admonition of the Lord, not turn them over to the wicked for instruction (Deuteronomy 11:18-19). No Christian has an excuse for not obeying God’s commandments in this matter, because His Word has already promised us that He will make a way:

“According as His divine power has given unto us all things that pertain unto life and Godliness, through the knowledge of Him who called us to glory and virtue” 2 Peter 1:3.

“Being confident of this very thing, that He who has begun a good work in you will perform it until the Day of Jesus Christ” Philippians 1:6.

To obtain helpful information about home education, even if you believe it’s not possible in your situation, please visit the Home Education page.