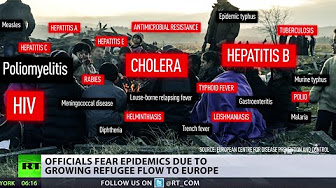 REFUGEES BROUGHT 20 DISEASES TO THE US

Dr Elizabeth Lee Vliet recently wrote an article for World Net Daily (WND), articulating how refugees brought 20 diseases, as well as fungal and parasitic infections to the United States, which have been ignored by the media.

Dr Vliet said many of these diseases carried into the US have previously been eradicated, or rarely seen here.

Vliet also stated that Measles is up more than 450 PERCENT; Hepatitis B is up 300 PERCENT; scabies escalated nearly 3,000 PERCENT!; HIV/AIDS increased 30 percent; tuberculosis (TB) is at least 30 percent higher; but German and US physicians suspect the (TB) infections are far greater than reported, to avoid causing public outrage over the increase because of immigrants. More than 40 percent of the TB cases are also multi-drug resistant.

Dr Vliet added that a similar pattern has emerged in the US since the massive increase in refugees and illegal border crossers beginning in 2010. She said that during a briefing to the Arizona Senate in 2016, experts reported that the US IS SUFFERING NEAR “PANDEMIC MEDICAL ISSUES” due to the influx of refugees and illegal aliens, reported WND.

Okay, folks, this is what we have here: first, a situation where the antichrist kingdom is plagued with diseases and sickness, which is historically the case, but these illnesses do not hinder them from their religious mandate to establish a global caliphate, if not through proselytization, through demographics; secondly, a condition created by the Liberal Luciferian Lunatic (LLLs) globalist, who want at least 97 percent of us dead (see the first tenet of the Georgia Guidestones).

The US has always supplied food, water and medicines to poor countries and there is no reason why we can’t continue to do that. Muslim refugees can be helped in their own countries, because their lives are not in peril for their religious beliefs. South Americans can be helped in their own country; they do not need to be allowed to come into the US for aid.

The Word of God tells us that God promised His people:

“If you will diligently hearken to the voice of the Lord your God, and will do that which is right in His sight and give ear to His Commandments, and keep all His statutes, I will put none of these diseases upon you, which I have brought upon the Egyptians (because the Egyptians worshiped pagan gods and persecuted God’s people), for I am the Lord who heals you” Exodus 15:26.

The Lord, over and over again, has promised in His Word to save us, when we repent, to reveal Himself to those who seek Him with all of their hearts, and to heal us:

“He was wounded for our transgressions, He was bruised for our iniquities; the chastisement of our peace was upon Him, and with His stripes we are healed” Isaiah 53:5.

Believe God for your safety and healing, if you love and obey Him. I don’t say that you will be safe or healed if you are a hypocrite, or are trifling with God.

“You shall seek Me and find Me, when you search for Me with all your heart” Jeremiah 29:13.

In the meantime, if you wish to help refugees, look for a bonafide Christian charitable organization that is already extending help, such as Rescue Persecuted Christians at shoebat.com (ministry of Walid Shoebat).

Lastly, unless God Himself leads you to them for His purpose, be wise and stay away from refugees and illegal aliens. *Point them in the direction of Obama’s house.