Radio host Art Bell was pronounced dead in his home in Pahrump, Nevada, on Friday, April 13, 2018, at age 72. The cause of death is not yet known, or has not been publicized.

Bell was one of the few radio talk show hosts who had no qualms about airing discussions about the spiritual realm.

Bell set up a syndicated radio station, Coast To Coast AM, at his home in Pahrump, Nevada, in 1984. Because of his controversial guests and their unusual topics, his program became the most popular all-night radio broadcast, aired on over 400 stations, with about 10 million listeners a week, coast to coast – and beyond.

Some of Bell’s frequent guests were UFO investigators, abductees and other witnesses who had unusual UFO experiences.

Bell had something in common with many of his guests. He and his wife, Ramona, had their own UFO experience while driving home from Las Vegas one evening. As they were driving along the road at night, they both saw a huge triangular UFO about 150 feet long. They noticed the craft made absolutely no sound as it moved along the night sky above them; there was no engine sound whatsoever.

(I have witnessed something very similar, but what I saw was in the shape of a giant “Spruce Goose,” with no sound, flat black and about 150 feet long. I have also seen other extremely fast moving craft at different times.)

Bell’s guests frequently spoke of Area 51, a highly classified, departmentalized and Restricted Area in Nevada, where witnesses have said that UFO reverse engineering takes place from the craft retrieved at the Roswell, New Mexico, crash site of 1947. 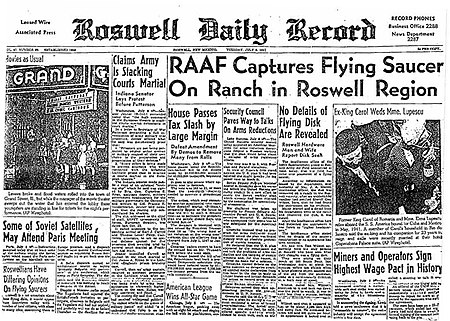 Wikipedia – Roswell Daily Record news clip reporting the retrieval of a “flying saucer,” which was quickly “corrected” to report a weather balloon crash. (Eyewitnesses later recounted their stories, saying they discovered UFO wreckage that was retrieved by the military.)

Art Bell hosted people from all walks of life and he gave them an opportunity to tell their stories, no matter how controversial or strange. We can only speculate at this point if it is strangely coincidental that he died on Friday the 13th, or if something sinister happened to him on that day purposefully.

The Book of Enoch, Book 1 Watchers, tells us that the spirits of the giants, when they died, were condemned to the earth. Albeit, men also were created to inhabit the earth and have dominion over it (a topic for another time), but we travel in the air by craft, do we not?

There is strong evidence to support that malevolent Nephilim spirits traverse the air space where satan’s domain is, until he is cast into the lake of fire (Revelation 20:10).

According to reports from witnesses, and evidence of animal mutilations throughout the world, many believe that the Nephilim have created hybrid bodies to inhabit, perhaps even with the cooperation of our own military, to navigate to and from their realm, between the lower heavenly atmosphere (not God’s higher heaven) and earth, about the same area chemtrails are dumped throughout the world constantly.

“We wrestle not against flesh and blood, but against principalities, against powers, against rulers of the darkness of this world, against spiritual wickedness in high places” Ephesians 6:12. (emphasis added)

The Prophet Daniel wrote about the last kingdom on earth, which Christ will destroy upon His return. He told king Nebuchadnezzar,

“There is a God in heaven that reveals secrets and makes known to king Nebuchadnezzar what shall be in the latter days…Whereas you saw iron mixed with miry clay, they shall mingle themselves with the seed of men, but they shall not cleave to one another, even as iron is not mixed with clay” Daniel 2:28, 43.

God has already said by the mouth of the Prophet Daniel that a strong kingdom will attempt to mix with the “seed of men” (= hybrids), “but they will not cleave to one another.” It didn’t work in ancient history (Book of Enoch, Book 1 Watchers), and it will not work in the future; God won’t allow it! (Daniel 2:44)

The Word of God tells us there will be signs in the heavens in the last days,

“I will show wonders in heaven above and signs in the earth beneath; blood, fire and vapor of smoke” Acts 2:19.

“There will be great earthquakes, famines and pestilences in various places and there shall be fearful sights and great signs from heaven” Luke 21:11.

“Men’s hearts failing them for fear, and for looking after those things which are coming on the earth, for the powers of heaven shall be shaken” Luke 21:26

Many are already witnesses of the same, myself included. My heart is not faint though, because the saints of God have been given power and victory over the enemy. 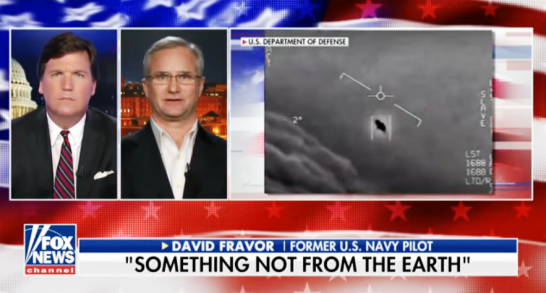 So, perhaps you don’t believe in God, the supernatural, or anything else that your range of analytical thinking cannot explain. Watch the following videos and then, even if you refuse to believe in God, or that the Son of God is the Savior of the world, who is soon to return as King of Kings and Lord of Lords, maybe you will at least believe in UFOs.

If after watching, you decide to believe in UFOs, why not believe in the Creator of all things, the One from whom all of this technology flows? These things are actually described in the Bible. Please read on…

This footage of two US Navy jet pilots spotting UFOs, provided by BBC News, was released by the Department of Defense:

Tucker Carlson with Fox News interviewed one of those pilots, David Fravor, and here is what he had to say:

Whether or not anyone wants to believe it, this technology is heavenly, of the spiritual realm, another dimension, and it has come to our universe through fallen angels. The UFOs described are driven, or rather given their guidance and propulsion, by the offspring of fallen angels, who become nephilim spirits after their decease (Book of Enoch 15-16).

Art Bell interviewed retired Colonel Philip Corso in 1997, on Coast to Coast radio: (https://youtu.be/1Uv9DIkM7K0). Col Corso saw an extraterrestrial being that died during the Roswell, New Mexico, crash in 1947, and he wrote a book, “The Day After Roswell,” about his experiences during the Roswell crash and the investigations that followed.

Col Corso said that Research and Development was repeatedly unsuccessful in replicating the spaceship for quite some time, until they discovered that the beings were part of the spacecraft. Their bodies were actually “the guidance and propulsion systems for the craft through electromagnetism.”

I listened to this interview between Art Bell and Col Philip Corso sometime just after I had completed a detailed yearlong series of monthly newsletters titled “Ezekiel’s Vision and the Last Days.” The series began in August 2015 and ended in July 2016. When I heard Col Corso tell Art Bell during the interview that the bodies of the aliens were “the guidance and propulsion systems for the craft through electromagnetism,” my attention was immediately drawn back to Ezekiel’s account of the angelic beings he saw, including their “wheels:”

Ezekiel 1, 3, 10 and 11 provide some descriptions of these angelic beings and their “wheels” that are fascinating and eerily similar to UFO sightings. Bear in mind, Ezekiel’s vocabulary didn’t include spacecraft, UFOs, flying saucers and electromagnetism. He used the terms “living creatures,” “wheels” and he said, “when the living creatures went up, the wheels went by them.” Is this not what Col Corso said in other terms? He said, “The bodies of the aliens were the guidance and propulsion systems.” Both men said basically the same thing using a different vocabulary.

The Word of God tells us concerning the last days,

“I will show wonders in heaven above and signs in the earth beneath; blood, fire and vapor of smoke” Acts 2:19.

“Great earthquakes shall be in diverse places, famines and pestilences; and fearful sights and great signs shall there be from heaven” Luke 21:11.

Those signs are here now, friends.