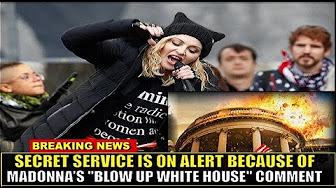 During Friday’s march, one woman held up a sign, “The future is female.” John Kerry, Sher and Madonna were among some of the big names in attendance at the women’s march held in Washington, Boston, LA and other major cities throughout the United States.

Isn’t that interesting? Chopping up and burning up unborn babies (saline abortions) in the womb have absolutely zero to do with reproduction, or healthcare, yet these terms were deceitfully used frequently among the women that marched to protest President Donald Trump’s pro-life ideology.

Since when is killing unborn babies “reproductive” or “healthcare?” The reproductive and healthcare words sound nice, but chopping up and burning up babies is really what’s going on here!

Madonna spoke at the march and she used the “F” word numerous times on live television, for which journalists apologized to viewers. Madonna is so outraged, she actually said,

“I’m angry. Yes, I’m outraged. Yes, I have thought an awful lot about blowing up the White House, but I know that this won’t change anything.”

Madonna was ranting, raving and even admitted she thought a lot about blowing up the White House! How evil is that?

That sounds like a demon talking, a stupid one at that.

The Secret Service said they would investigate her comments. They have a duty to arrest her for inciting riots, while speaking publicly about blowing up the White House. You or I would be headed to prison already for saying the same things!

A sign said, “No justice, no peace.” In other words, If we can’t chop up and burn up unborn babies, and allow Planned Parenthood to sell unborn babies’ body parts, there will be no peace!

There was a lot of vulgarity on many of the signs carried during the protests.

Women even referred to their own selves on their signs using vulgar words. I can’t publish them in this article, because they are too obscene. In fact, I have never seen so much vulgarity among groups in my entire life. I viewed photos of the marches throughout the US that were posted on the Daily Mail and I have never seen men use such vulgarity, as the women used in these pro-abortion marches. It was really astonishing to me. The vulgarity was often displayed with vulgar images, very profane.

How stupid is that?

Women are becoming so wicked in these last days that I even read a story several months ago about a woman that married her own daughter! That’s not all; she married her own son in 2008! That marriage was annulled in 2010. It was so awful, I couldn’t even write about it, but since we are on the subject of obscene women, who apparently love nothing more than to brutally murder their unborn babies, I’ve decided to report it, in case you didn’t see that news.

Stephens County Sheriff’s Office
This demonstrates just how wicked people are becoming and how satan has unleashed his minions to wreak havoc on the earth at the end of the age.

“Because iniquity shall abound, the love of many shall wax cold” Matthew 24:12.

“This know also, that in the last days perilous times shall come, for men shall be lovers of their own selves, covetous, boasters, proud, blasphemers, disobedient to parents, unthankful, unholy, without natural affection, trucebreakers, false accusers, incontinent, fierce, despisers of those that are good, traitors, heady, highminded, lovers of pleasures more than lovers of God” 2 Timothy 3:1-4.