The Democrats have talked about impeaching President Donald Trump for the last two years, but they are now FRANTIC to remove our great president!

You may remember that President Donald Trump’s Administration filed tens of thousands of sealed indictments (the count continues to increase) against criminals throughout the United States, and we have been waiting to see who some of those people are. We suspected they would likely be involved in human trafficking, pedophilia, sex slave operations, and the like.

You can believe that some people throughout the US, especially in Washington, started hyperventilating after that statement!

Those indictments have been incrementally unsealed and defendants are being prosecuted. You have likely not heard of most, if any, of the following cases from mainstream media.

They are complicit with pedophiles and crimes against children. Why else would they withhold such bombshell news from the public?

Brace yourself for the following:

Democrat attorney Mark Benavides sentenced to 80 years in prison for raping/torturing women, whose defense cases were assigned to Benavides by the court! https://www.dcclothesline.com/2019/08/29/media-blackout-powerful-democrat-attorney-found-guilty-on-6-counts-of-human-trafficking/

Democrat attorney Paul Peterson, who has strong ties with Senator Jeff Flake and the late Senator John McCain, was indicted on smuggling illegal aliens, adoption fraud, and other charges: https://www.dcclothesline.com/2019/10/11/arizona-adoption-attorney-arrested-for-human-trafficking-had-strong-connections-to-jeff-flake-and-john-mccain/

Raniere has some very high profile codefendants awaiting sentencing in their cases as well: Allison Mack, Lauren Salzman, Nancy Salzman, Clare Webb Bronfman and Kathy Russell, who are all sentenced to only house arrest!

**Bronfman gave $6 million to the Department of Justice to reduce her sentence! Don’t we call that bribery?**

Personally, I am still waiting for the take-down of James Alefantis, John and Tony Podesta and Hillary Clinton! 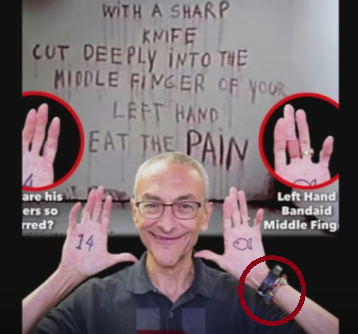 These cases would likely not have been prosecuted, just as Jeffrey Epstein’s case wasn’t prosecuted during Barack Obama’s “stint” in the White House, if not for the Trump Administration. In fact, during the Obama fraud, Jeffrey Epstein was not only given a deal fit for a civil infraction, but Epstein’s coconspirators in human trafficking, rape, child molestation, and the like, were promised anonymity and no prosecution!

If you enjoy seeing pedophiles torture little children, human traffickers destroy the lives of children and women, rapists go free, and millions upon millions of illegal aliens turn your communities into tent poop/piss cities and receive your Social Security funds for their support, vote for your favorite LLL Liberal-Progressive-Socialist-Marxist-Leninist-Communist DEMOCRAT!

“The vile person shall no more be called liberal (that’s right, they call themselves Progressives now), nor the greedy (וּלְכִילַי – original Hebrew) said to be bountiful. The vile person will speak villainy and his heart will work iniquity, to practice hypocrisy and utter error against the Lord, to make empty the soul of the hungry and he will cause the drink of the thirsty to fail. The instruments also of the churl are evil; he devises wicked devices to destroy the poor with lying words, even when the needy speak right. But the liberal devise liberal things and by liberal things shall he stand” Isaiah 32:5-8 (ET – Elim אֵילִם Translation)

“For You have forsaken Your people, the house of Jacob, because they are satisfied from the east, and act covertly like the Philistines, and they please themselves in the children of strangers (original Hebrew) they are slapping hands in compact (child trafficking!)” Isaiah 2:6 (ET – Elim אֵילִם Translation)