STRANGE FLASH OF LIGHT OVER PHOENIX

Residents in Arizona, California, Nevada, Utah and New Mexico reported sightings of a mysterious flash of light in Phoenix on Tuesday.

The source of the light is unknown, although people speculate it could have been a meteor, or a UFO.

The City of Phoenix tweeted: 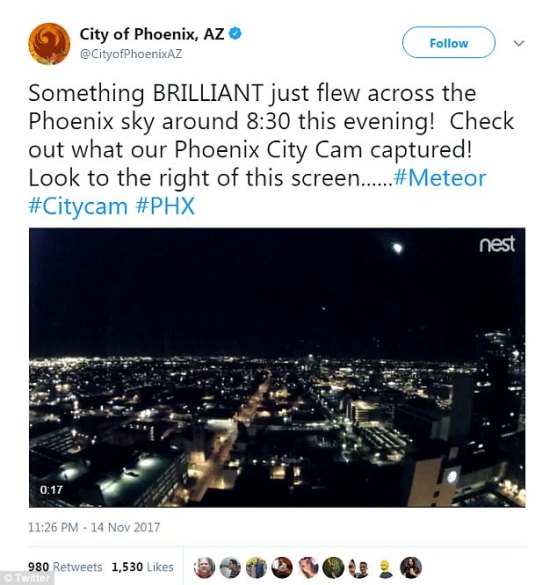 “Great earthquakes shall be in diverse places and famines and pestilences and fearful sights and great signs shall there be from heaven” Luke 21:11.

The following is “Part 7” in a series of monthly newsletters uploaded to a sister site. This month’s letter was especially interesting, so I thought I would share it on Now Prophecy. If you are blessed by this letter, feel free to check out the preceding newsletters posted through the following link: Prophetic Newsletter

Last month, we reviewed Ezekiel’s description of the “living creatures,” cherubim, and their “wheels,” which he saw come down from heaven under the throne of God (Ezekiel 1). Angels and cherubim are described in the Bible. We also know through the scriptures that a third of the angelic host fell with satan when he defied God (Isaiah 14:12; Revelation 12:4-9); and being celestial, having fallen from God’s own heavenly host, satan and his angels have power. It also appears that these angelic beings travel by elaborate craft, according to Ezekiel’s vision. With these facts in mind, let’s run forward to the present. UFO sightings are reported globally and more frequently as each year passes. Some countries have released their UFO files, and the Vatican hierarchy can’t say enough about their imminent expectation of alien visitors. The Vatican holds more ancient information about fallen watchers than any organization on the planet. They have published choirs singing praises to “Lucifer,” whose “Son is Jesus” (this is their proclamation) on You Tube! The Vatican’s strongest telescope on Mount Graham, Arizona, is named “Lucifer;” how fitting! Some report that they have had “encounters” with fallen watchers and are now convinced that Lucifer is God and he will descend with his “heavenly host” shortly. The latest Pope, Frances, the 112th Pope, is said to be the last Pope this side of the Lord’s return, according to the Malachy Prophecies, which have been accurate so far. In last month’s newsletter, I emphasized Ezekiel’s detailed description of the fact that “the spirit of the living creature was in the wheels” (Ezekiel 1:20,21). He repeated this description in both verses 20 and 21 of Ezekiel 1. I found this description very intriguing after I heard Art Bell’s (1997) interview with Colonel Philip J Corso on Coast to Coast (https://youtu.be/1Uv9DlkM7K0). Col Corso has a very impressive background, having worked as the Army’s Chief of Foreign Technology Division (FTD) at the Pentagon (1961) and Chief of Research and Development. The very talented Dr Wernher Von Braun, who was later dubbed “the father of rocketry,” originally worked in Col Corso’s division. Von Braun was a Nazi brought into the US from Germany through Project Paperclip after the Holocaust, because of his superior knowledge of rocket science. Col Corso admitted in recent years that he saw a dead “alien” from the Roswell crash, which resulted in a government coverup, and he divulged details of the event in his book The Day After Roswell. I was fascinated by Ezekiel’s description, “the spirit of the living creature was in the wheels,” especially after hearing Col Corso’s interview with Art Bell, when Corso said, “Research and Development was repeatedly unsuccessful in replicating the space ship for quite some time, until they discovered that the beings were part of the spacecraft. Their bodies were actually the guidance and propulsion systems for the craft through electromagnetism.” Col Corso said he discussed this technology with Dr Wernher Von Braun himself. The entire interview had nothing to do with the Bible, prophecy, Christianity, or anything at all pertaining to God’s Holy Word. I have no idea whether either one is a Christian, but according to all that was discussed during the more than two-hour video, I heard nothing about God, or prophecy. I doubt either one of these men were aware of Ezekiel’s vision, otherwise, they certainly had an excellent opportunity to tie in the ancient writings penned thousands of years ago with the technology discovered by Col Corso’s team of scientists at Research and Development. In fact, I have no idea whether anyone has ever discovered this link, beside myself. I have never heard it before, but these are strikingly parallel descriptions given first by an ancient prophet thousands of years ago, then by a modern era rocket scientist! I almost grudgingly came to the conclusion that UFOs were real, after reading Ezekiel’s description of cherubim and their “wheels,” together with the fact that I have seen UFOs, some as recently as 2014. After I finally understood that the Book of Enoch is a hidden portion of God’s Holy Word, and I read the divine book, I not only believed in UFOs, I realized they are a part of God’s created beings and are used to transport cherubim and apparently watchers. God has not only brought all of these revelations to me just recently, but countries all over the world have released their UFO files in the last several years, and the Vatican’s astronomer expects “alien” visitors any time and he said the Catholic Church will baptize “aliens,” which I firmly believe are fallen watchers and are integral to the “lying wonders” of the last days that the Apostle Paul wrote about: “…whose coming is after the work of satan, with all power, signs and lying wonders, and with all deceivableness…” 2 Thessalonians 2:9-10. I am out of space. To be continued…God willing.