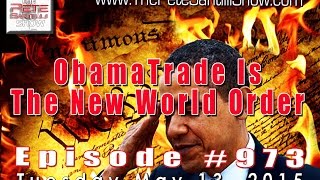 US SOVEREIGNTY “KICKED TO THE CURB” BY CONGRESS

As White House officials release more information about “Obamatrade” (better known as Obama-betrayed), it appears the final “death nail” has been driven into America’s coffin by Obama, his cohorts and Congress – all of them.

Even though both Republicans and Democrats are “complaining” about Obamatrade, was it not the majority of both that granted Obama “fast-track” power regarding international trade agreements? Don’t ACTIONS SPEAK LOUDER THAN WORDS?

We already know what Obama is about, Socialism, hates capitalism, hates about everything the United States stands for; but it has been a long, drawn-out process for many to understand that Congress participates in this conspiracy to form a global government, thereby abandoning the sovereignty of this nation and the United States Constitution.

I imagine their pockets would be bursting at the seams and gushing cash all over Washington, if not for the Black Card Club!

Barack Hussein Obama has made trade agreements with 12 countries, the TransPacific Partnership (TPP), a global conglomerate, “controlling 40 percent of the world’s economy” (which is an understatement to soon be revealed), which gives its Commission the power to regulate “immigration, food, energy, medicine, the internet, copyrights, patents and businesses within US borders.”

The TPP TYRANNY has just begun. Other nations will join and this is the beginning of a global dictatorship – a New World Order.

Albeit, there will be those who withstand such totalitarianism until the end of the age. The archangel Gabriel already told the Prophet Daniel thousands of years ago that the last kingdom on earth will be a mixture of “iron and clay” (Daniel 2:41-45), those who are evil, vicious, having iron-hard hearts, who will stop at nothing for money and power; and those who still have tender hearts, who will lay their lives down for what is just and right, for freedom and to help the poor and each other.

The United States has been taking micro-steps towards globalism for decades, but when Congress stepped aside to allow Obama(don’t)care, and then for the TPP, it should be apparent to everyone now that the United States is no longer a sovereign nation, but part of a global tyranny which has been creeping in through a secret passageway for a very long time, which is slowly rising to the surface of public awareness.

“Thus saith the Lord, Behold, I will make you a terror to yourself and to all of your friends, and they shall fall by the sword of their enemies and your eyes will behold it; and I will give all Judah into the hand of the King of Babylon and he shall carry them captive into Babylon and shall slay them with the sword” Jeremiah 20:4.

Israel is God’s elect, His chosen people among all peoples; but when Israel turned his back on God and disobeyed His commandments, God allowed Israel to fall into the hands of his enemies, not only to be taken captive, but to be mercilessly slain. We saw God’s wrath fall upon him again when Hitler annihilated about six million Jews.

This is exactly what will happen to America, unless America repents en masse. God will not chastise Israel with such fury, but allow America a free pass to trample the blood of Jesus Christ our Savior and His commandments!

This nation is already under the judgment of God Almighty, which is exactly why the likes of Barack Hussein Obama is sitting in the White House, with our economy teetering on the brink of a freefall – with no hope of return.

Mainstream news media is propaganda in this war and you are not hearing the truth about our economy. It will fall suddenly and without warning to the public, with exception to the iron-hearts who trigger it, just as it happened during the Great Depression. No one should ever forget the Great Depression, or why it happened.

Repent, Americans, repent, while there may still be time! Repent, not only with hope that God will spare this nation, but with blessed assurance that He will deliver all of those who do repent from the very fires of eternal hell – for kicking prayer out of schools, kicking His Holy Word out of schools, slaughtering the unborn and selling their bodies for gain, for raping the minds of little children with X-rated sex “education,” even going so far as to teach them sodomy in public school, which is an abomination in the sight of God (Leviticus 18:22)!

The Holy Word of God tells us,

“The wicked shall be turned into hell, and all nations that forget God” Psalm 9:17.

“If your hand offends you (causes you to sin), cut it off (for example). It is better to enter into (eternal) life maimed, than having two hands to go into hell, into the fire that never shall be quenched, where their worm dies not and the fire is not quenched” Mark 9:43-44.

There’s no getting around it; this is what Christ said, and He does not lie.

This nation is on its way down to the antichrist kingdom rapidly, a definite sign also that the Lord’s return is near. Will you go down with it, or are you prepared and waiting to face God?

As nations are forming a global dictatorship, jihadi Muslims are being released throughout the major nations of the world, to infiltrate and to dominate! Do you believe this is coincidental? Please consider that question carefully.

“He causes all, both small and great, rich and poor, free and bond, to receive a mark in their right hand, or in their foreheads, that no man might buy or sell, except he who has the mark, the name of the beast, or the number of his name. Here is wisdom. Let him who has understanding count the number of the beast, for it is the number of a man and his number is six hundred, sixty-six” Revelation 13:16-18.