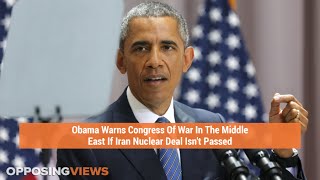 Barack Obama said recently that if Congress kills the Iran deal, America will have to attack Iran and Israel will suffer an “asymmetrical attack.”

Obama spoke to American Jewish leaders on August 4th and his “con” was that if the US strikes Iran, Iran will increase terror against Israel.

I would have loved to have asked Obama why he didn’t give Israel the “bunker buster” bombs they asked for three years ago? Israel could have, and would have, knocked out Iran’s underground nuclear program and it would have been a wash – as simple as that. Iran couldn’t have effectively retaliated and they couldn’t have increased their nuclear power. Not only would Israel have undertaken the task without US help, they would have safeguarded Israel AND the US from a nuclear attack.

Obama also now claims to have a letter signed collectively by dozens of retired Generals and Admirals. I completed searches of four of them selected at random and I found, 1) “Hass” Cartwright, retired Major General, was favored by Obama during his active service and was referred to by Republicans as “Obama’s General.” It doesn’t appear that “Obama’s General” would give an objective opinion on the matter. 2) Frederick H Lawson, US Army, was nowhere to be found on the internet. How interesting that this US Army Major General is nowhere to be found, not even in the Army archives! 3) William L Nash, Major General, US Army, had little written about him, one short paragraph, in en.wikipedia.org, and the page was updated in April 2015! 4) I found absolutely no background information for Alan Steinman, Rear Admiral, US Coast Guard, other than he is retired and now works as a medical consultant.

Folks need to take a better look at that letter.

The opposite of these attributes are “fear, weakness, hatred and a lunatic mind,” which describe Progressive globalists perfectly, as well as their cohorts, maniacal Muslim terrorists. Globalists fear overpopulation, which is a threat to them, so they hate the “useless eaters,” which leads to lunacy, because evil begets evil, the opposite of godly attributes. Terrorists fear their god, whose “holy book” tells them to kill all nonMuslims (eventually).

“Do you not know that to whom you yield yourselves servants to obey, his servants you are to whom you obey, whether of sin unto death, or of obedience (to God) unto righteousness” Romans 6:16.

Is it righteous to terrorize and kill all of those who are not of your own religion? Muslims think so, because the Qur’an tells them this is righteous:

“When you encounter the infidels, strike off their heads” Surah 47:4.

“If you encounter those who disbelieve, strike their necks…behead them” Surah 7:4.

Even if all Muslims are not participating in “holy” jihad right now, do you suppose that they denounce what is written in the Qur’an? Don’t even consider it.

This “deal” is meant to bring about a controlled Holocaust.

John the Revelator wrote about 2,000 years ago regarding the end of days,

“The nations were angry, and Your (God’s) wrath is come, and the time of the dead, that they should be judged, that You (God) should give reward unto Your servants the prophets, and to the saints (God’s people) and those who fear Your name, small and great, and should destroy those who destroy the earth” Revelation 11:18.