A GENERATION WITHOUT FEAR OF GOD

On Friday, May 18, 2018, 17-year-old Dimitrios Pagourtzis shot nine students and one teacher to death at Santa Fe High School, Santa Fe, Texas, and injured 13 others. Authorities said there were no indicators that Pagourtzis would commit such crimes, except that he wore a T-shirt that said, “BORN TO KILL.”

Pagourtzis posted pictures on his Facebook page of his “BORN TO KILL” T-shirt, a .38 caliber handgun, with his long green trench coat, complete with Nazi regalia, that he wore to school every day, even in the heat. 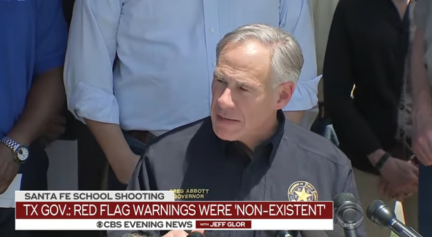 Pagourtzis brought explosives with him to the high school, including C02 and Molotov cocktails, in addition to the gun he used to shoot nine students and a teacher to death at Santa Fe High.

After Nikolas Cruz shot and killed 17 at a Florida High School, news surfaced that an informant told the FBI that Cruz was “going to explode,” along with a number of other warnings given to law enforcement.

It seems the Liberal Luciferian Lunatics are quick to call for gun confiscation, but they don’t seem to want to get up off of their hind ends to follow up on some leads that could save a lot of kids’ lives, do they?

Let’s see now, ban all guns so no one has any defense against killers who possess illegal firearms, and certainly no defense against the Liberal-Progressive-Socialist-Marxist-Leninist-Fascist-Communists, who are actually behind the underlying rage built up in adolescents today.

There is about as much sensibility to the investigations into the killing of 10 in Texas, and the 17 killed in Florida, as there is in the XXX-rated, pornographic “Sex Positivity” videos they are showing to kids in public schools, and the sodomy classes they are giving to 10-year-olds in public schools, among other XXX-rated sex “education,” actually pornography, to help warp the minds of your children. Linda Harvey, talk show host with WRFD, Columbus, Ohio, more appropriately calls it, “Sex Ed Mayhem.”

They all need to be arrested for child molestation and thrown in jail! This is insanity!

Add Hollywood’s horror/violence film/pedophile industry into the mix, with violence and killing included in popular game videos, and you end up with some major psychopathic issues brewing in the hearts, minds and souls of children today.

A pictorial of what has happened in America since God and prayer were kicked out of schools, and since evolution monkey charts were hauled into the classrooms, along with the “Sex Ed Mayhem,” is telling:

Children used to attend church with their families in the 60s and 70s. How many unwed mothers were around in the 60s-70s? How many abortion clinics were chopping up unborn babies in the US? How many kids were suffering from sexually transmitted diseases? The statistics today, however, are staggering.

Do we see a trend here that started with kicking God out of classrooms?

Instead of banning/confiscating guns, we need to kick all of the LLLs, their vile curriculum, their “pooping superintendents”

and child-molesting teachers out of the schools!

The youths that shot and killed other students and teachers may be as guilty as sin, but don’t kid yourselves, they are also victims of their environment.

Their wicked influences, lack of God-consciousness and a healthy fear of God, is what helped land them where they are today.

How many kids were shooting up schools in the 70s? Again, children were predominantly raised in Christian conservative homes.

Pagourtzis and Cruz don’t seem to be having a good time now, facing life in prison, or the death penalty.

Screen shot: YouTube.com – Pagourtzis only hung his head in court

“The fear of the LORD is the beginning of wisdom. A good understanding have all those who keep His commandments; His praise endures forever” Psalm 111:10.

“The fear of the LORD is the beginning of knowledge; but fools despise wisdom and instruction” Proverbs 1:7.

When public schools kicked the Word of God and prayer out of the classrooms, they literally kicked wisdom and knowledge out of schools, according to the Word of God.

The LLLs are at the center of the problems concerning youth today, and unless people realize it, even if guns are confiscated, children who are given no godly instruction and influenced with all kinds of evil, even in their classrooms, will use cars, knives, bombs, and you name it, to kill people, if that’s what they fully intend to do.

A lot of things can be used to kill people, but guns are vital for rapid defense in a very evil and depraved society. Many of the same lying dogs that want to take your guns, wouldn’t give up theirs, or their bodyguards, for anything.

Immature brats shouldn’t have access to guns. What was Pagourtzis, still in high school, wearing Nazi regalia and a “BORN TO KILL” T-shirt, doing with a gun?

By the grace of God, I won’t give up my guns because parents are allowing their kids to grow up as godless fools, without any fear of God, and then allow those same kids access to their guns.

In fact, that’s just one of the very good reasons why I will keep all of my firearms.

The LLLs need to be barred from influencing children, because their Liberal-Progressive… tactics are at the core of these tragedies.

Please visit the Home Education page for some helpful information. Even if you don’t have the means to home educate right now, please visit the page. There is some important information included just for you. In the meantime, please pray over your children every day and share God’s Word with them as often as you can.

“This know also, that in the last days perilous times shall come, for men shall be lovers of their own selves, covetous, boasters, proud, blasphemers, disobedient to parents, unthankful, unholy” 2 Timothy 3:1-2.